Young golfers Rickie Fowler, Smylie Kaufman, & Justin Thomas have been in the news following The Masters due to their antics on the social media platform Snapchat. As the guys hung out in the Bahamas and played Baker’s Bay, those that viewed their stories saw lots of CASAMIGOS tequila t-shirts, Rowdy Gentlemen apparel, and of course the major brands that represent those golfers like Puma and Under Armour. Jordan Speith was also seen wearing a Steph Curry jersey, another athlete that is signed with Under Armour as well. 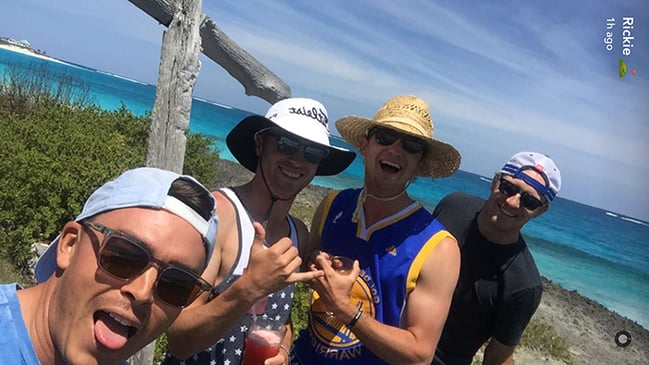 Using popular accounts on Instagram to promote swimwear, fitness protein, and smaller clothing brands has been used throughout the past few years. However the concept of having these up and coming golfers promote brands while seeming to have the time of their lives on snapchat is as new to marketing as it is to the PGA tour.

43% of consumers are more likely to buy a new product when learning about it on social media.(Nielsen)

78% of U.S. online consumers purchase decisions are influenced by the posts of the brands they follow on social media.

The concept of using brand ambassadors in golf is not a new one, as brands have signed contracts with golfers to wear exclusively their clothing, hats, shoes, and clubs since the seventies.

Nike Golf singed Tiger Woods in 1996, and a year later, he won his first Masters at the age of 21. The amount of exposure this brought Nike Golf was huge, allowing them to really develop their line of golf apparel and expand into creating their own clubs and golf balls as well. Having a younger golfer in the spotlight allows brands to advertise to the golfers peer group instead of their dads.

Now, brands that are seen in Fowler’s snapchat don’t necessarily have to rely on him winning any tournaments because of exposure on his snapchat.

CONCLUSION: With the millennial buying power increasing, make sure a social media platform is front and center in your budgeting. Not just for golf; any industry silo where brand ambassadors are key: action sports, team sports, outdoor, cycle, fitness, etc.

At RepSpark, we understand that selling has moved beyond a sales pitch and a handshake, which is exactly why many clients turn to us. The modern sales team must leverage technology to make their customers more successful.

Drop us a line